As I dove into writing this post, it quickly became apparent that truly great key performance indicator examples function on multiple levels. There is both a strategic or high-level measure of success and an operational or tactical level of success. This post will review three examples of North Star goal setting that have gone on to produce great results. The assumption is that if you achieve your goals at the strategic level, you must be doing something right at the operational level.

Three (3) examples of North Star goals that work are

A common thread of all these projects is a visionary leader coupled with an organizational North Star. A North Star goal is similar in concept to a BHAG (Big Hairy Audacious Goal). In his timeless classic Good to Great, Jim Colin’s coined the term BHAG.

The first example of a North Star goal is Project Apollo. Project Apollo was the third human spaceflight program carried out by the National Aeronautics and Space Administration (NASA). President John F. Kennedy championed the program, famous for landing the first person on the moon. Project Apollo unleashed America’s creative energies and was probably one of the most successful large-scale projects in global history.

The Cold War-era dawned shortly after World War II. The era was a titanic struggle for supremacy between the United States and the Soviet Union. On October 4, 1957, the Soviet Union launched the earth’s first artificial satellite Sputnik. The successful launch came as a shock to the United States and perhaps a blow to their national ego. The fact that the Soviets were successful fed fears that the U.S. was falling behind in developing new technology. As a result, the launch of Sputnik intensified the space race and raised tensions between the two nations.

At Rice Stadium in Houston, Texas, on September 12, 1962, JFK said, “… [The United States] should commit itself to achieving the goal (North Star), before this decade is out, of landing a man on the Moon and returning him safely to the Earth.”

The Apollo Project had a specific and explicit North Star goal and a measurable outcome. “Get a man to the moon and return them to earth.” The goal was challenging to achieve with the technology available and yet also attainable. Finally and perhaps most importantly, the goal had a hard time limit “by the end of the decade.”

The Project Apollo mission culminated when Neil Armstrong took the first step on the moon on July 9, 1969. The Apollo program had a clear destination, focused objective, and a simple, measurable definition of success. Finally, on July 24, 1969, the crew of Apollo 11 splashed down about 812 nautical miles southwest of Hawaii. The triumphant return of Apollo 11 and its crew fulfilled the ambitious goal set by JFK and was a great source of American pride.

What I find truly fascinating about the Paul O’Neil story is the rationale for choosing Safety as Alcoa’s key measure of success. Safety as your key success metric seemed extremely counterintuitive at the time. In 1987 corporate America was focused on profits and value to shareholders. The link between “Safety” and improved shareholder value was somewhat oblique. Alcoa at the time had a good safety record when benchmarked against the rest of the industry. The challenge before O’Neil was finding a North Star that would satisfy the needs of all stakeholders; workers Union, Management, shareholders, and the board of directors.

“Safety” is a key performance indicator that all organizational stakeholders could endorse. The theory was that safety would create foundational organizational habits that would lead to positive side effects. The result of improving safety would be an overall improved organization. Interestingly enough, Alcoa’s performance did improve under Paul O’Neil’s leadership, and the organization continued to be an industry leader for a long time after O’Neil stepped down.

https://www.youtube.com/embed/tC2ucDs_XJY?“Lost workday rate” is a safety metric that measures the number of workers out of 100 that lost at least one day of work due to injury. In June of 1987, when Paul O’Neil started as CEO of Alcoa, the Lost Work Day rate was 1.86. The industry average at the time was five (5). One of Paul O’Neil’s first meetings was with the Director of Safety. He informed the Director of Safety that Alcoa’s goal for safety going forward would be a Lost Work Day Rate of zero “0”.

O’Neil chose Lost Work Day Rate as Alcoa’s key success indicator because it would align the interests of all stakeholders and create a positive organizational change. Many organizations say that people are their most valuable asset. However, the follow-through and delivery on this value are often absent. Making Lost Work Day Rate the critical measure of success would provide a tangible way for Alcoa to demonstrate that employee health and well-being are essential.

Paul O’Neil became CEO of Alcoa in June of 1987 and retired as Chair of the board in 2000. During his tenure, Alcoa continuously improved its financial performance and safety record. However, Paul O’Neil’s measure of success for his leadership was how the culture endured after his departure. For example, when he first became the leader in June of 1987, the Alcoa “Lost Work Day Rate” was 1.86. In 2014 almost a decade and a half after leaving the organization, the Lost Work Day Rate was 0.126. 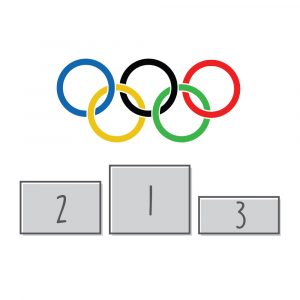 OWN THE PODIUM PROGRAM

The third North Star goal-setting example is Canada’s Own the Podium project. Own The Podium (OTP) is a program introduced to prepare Canadian athletes for the 2010 Winter Olympics in Vancouver. The program continues to operate in Canada and has broadened its mandate to include the Summer Olympics. According to the OTP 2007 annual report, the program stated goal was;

Canada had hosted the Summer Olympic Games at Montreal in 1976 and the winter games at Calgary in 1988. However, Canada also had the dubious distinction of being the only Olympic host nation NOT to win a gold medal at home. So when Vancouver won the right to host the 2010 Winter Olympics, Canada launched “Own the Podium.”

The thirteen agencies met in Calgary in 2004 after Canada had won the right to host the Vancouver 2010 Winter Olympics. The initial meeting developed a framework for success to put Canadian Athletes on the podium. The Own the Podium program was born.

The abbreviated program mission, vision were;

The project had a specific and explicit goal coupled with a measurable outcome. The project was also time bounded and had a specific date for completion. Perhaps most importantly, the program delivered results at the 2010 Winter Olympics in Vancouver.

I remember watching the Vancouver 2010 Olympics on TV and sharing the moment with friends on Twitter. On February 14, 2010, Alexander Bilodeau became the first Canadian to win a gold medal on Canadian soil. It was indeed a joyous moment. The Vancouver 2010 Olympics were a great source of Canadian pride and a significant accomplishment in placing athletes on the Olympic podium. Canada won the most gold medals ever at a Winter Olympics and had our best showing on the world stage.

With a clear goal and measures of success Own The Podium prepared Canada athletes for Vancouver 2010. As a result, Canada went on to place 3rd overall and win 26 medals (14 Gold, 7 Silver, and 5 Bronze). The medal haul at Vancouver 2010 was Canada’s best performance at the Olympics and set a record for the most gold medals won by any country at a single Winter Olympics.

Communitech 2021 “Own the podium for scale-ups”

I have been watching the growth of the Kitchener-Waterloo tech ecosystem with great interest. Communitech (Kitchener-Waterloo economic agency) recently hired Chris Albinson as the new CEO. At the top of Chris’s to-do list is to create a tech-focused version of the Own the Podium program. Chris observation is that:

“All the same ingredients exist for Canada to own the podium again — but this time, in the world of technology and innovation.”

The program North Star creates fourteen (14) more Shopify (one Billion Dollar companies). The goal certainly ticks both the BIG and Audacious boxes of the BHAG. However, it would be great to see other economic development agencies put aside their regional tribalism and rally behind the Communitech North Star.

When you dig into examples of North Star goals, there is usually a visionary leader and a North Star. The goals have a specific, measurable result and are time-bounded. But, perhaps most importantly, successful programs with a big vision have excellent implementation and produce long-term sustainable results.